Hot off the press! A brand-new look at the history of the black-Jewish alliance in the 1950s and 1960s. It’s my most popular talk right now as audiences seek ways to understand how American Jews intersect with such challenging topics as Black Power, the Nation of Islam, Black Lives Matter, and the dynamics of white Jewish liberalism. 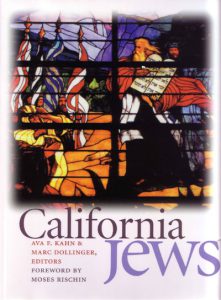 You’re not in New York City anymore! This multi-media presentation is a tell-all of California Jewish life, exploring how the Golden State offered Jews a history unmatched in the rest of the United States. 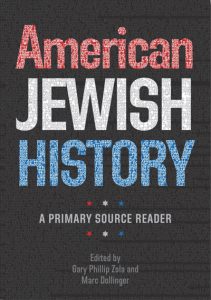 It’s the American Jewish history time machine! Join us as we travel back to 1654 when the first Jewish immigrants arrived on American shores. Exploring historical documents, listening to popular Jewish music, watching video clips, we’ll figure out what it means to be Jewish in America.

1619, 1654, 2020: Jews, Race, and U.S. History
With protests gripping the nation, so many American Jews are reflecting on systemic racism and ways we may be able to help. Join us for a candid, and probably difficult, journey through American Jewish history as we explore historical documents about Jews and racism. We will think about what is means to “become American” and the ways that racism has played among and within the Jewish community.

Engage in this four-part lecture series that covers the most important historical moments for American Jews and questions of race. We begin with “Jews and Whiteness” exploring how white-presenting Jews have, and have not, been considered privileged in U.S. history. Then, we dive deep into the civil rights movement of the 1950s and early 1960s, learning new insights into both southern Jews and northern Jewish participation in racial justice causes. Next, we learn about the apparent break-up of the Black/Jewish alliance in the mid-1960s with a close reading of the Black Power movement and its inspiration for American Jewish public identity. We close with a 360-yeaer overview of Jews, race, and racism, examining actual historical documents that will show us how “becoming American” often meant participation in racist systems. If you wish, we can add a fifth session devoted exclusively to questions, answers, and dialogue about our learnings together.

An overview of the challenges of modern American Jewish invoking the popular 1970s commercial slogan, “Be Original. Be Part of the Crowd.”

The discovery of gold in the foothills of the Sierra Nevadas inspired a massive immigration to California and an exciting new chapter in American Jewish history.  Unlike cities to the east, San Francisco offered its Jewish residents unprecedented opportunity in business, education, and social life. It also created high levels of assimilation and huge Jewish communal challenges. Come explore the fascinating and complex world of Jewry in San Francisco and the Bay Area.

All of Jewish History in 2 hours:

From the Biblical times of Kings Saul, David, and Solomon to the contemporary era of American Judaism and Israel, Jews have ventured across the globe bringing dramatic changes to the worlds around them just as the Jewish people has adapted to the cultures that surrounded it. In the middle of it all, historians have struggled to find ways of understanding and explaining the entire history of the Jewish people....in just two hours!  Come join us as we explore the themes, challenges, and opportunities of thousands of years of history in a mere 120 minutes.

In the early 20th century, Christian missionaries sought to convert Uganda's King Kakungulu. After reading the Bible he was given, he decided he only liked the first half (the Hebrew Bible) and declared himself Jewish. Now five generations strong, the Abayudaya Jewish community of Uganda enrich our understanding of Jewish life and challenge many of our assumptions about what it is to be Jewish. Join Professor Marc Dollinger as he shares his experience visiting the Abayudaya Jews of Uganda.

A multi-media presentation detailing Jewish life in Poland, Ukraine, Belarus and Lithuania, both historically and today. This lecture grows from the bat mitzvah journey of Professor Dollinger’s daughter, Shayna, who spent a month in eastern Europe to discover what it means to be named “Shayna.” The talk is delivered by both Marc and Shayna.

This history of Jews and racial status looks at an ethnic group that has moved back and forth across the racial divide. It reflects on the current status of Jewish social justice work as well as Jewish interactions with groups such as Black Lives Matter. It’s also a preview talk for a subsequent lecture on the BDS movement.

Affirmative Action, Quotas and the Myth of Meritocracy

An insider's look into the current state of American colleges and universities. We will study the history and current debates over the role of Jewish Studies in the multi-cultural universtiy and its impact on Jewish women and men in the last forty years. We will trace the history of Jews in American higher education from the turn of the century, through the lifting of restrictive quotas in the 1950s to the campus protests of the 1960s and 1970s and into the contemporary debates of the 1980s and 1990s.

Are American Jews white? The question, answered differently by different generations of American Jews, gets at the heart of American Jewish identity. Have Jews remained separate and distinct from the rest of middle-class America or have they assimilated so much that they have become white? Come explore the contentious history and sociology of Jews and racial definition. We'll journey back to the 1960s and discover some (surprising) insights into the debate over Jewish whiteness.

Following the Jews and whiteness talk, or as a stand alone, this lecture examines the BDS movement through the lens of American Jewish history, power and privilege. It is not an advocacy-based talk. Instead, it seeks to give attendees a sense of the larger context in which Jewish college students live and interact, reflecting how their preparedness (or lack thereof) reflects recent American Jewish history.

American Jews vote more liberal and Democratic than any other white ethnic group in the United States. Yet, several distinct subgroups within American Jewish life embrace conservatism and the Republican party, including the overwhelming majority of Orthodox Jews. If you’re ready for a partisan political fight full of name-calling and competing claims of which politician is “better for the Jews”….you won’t find it here!  Instead, join us for an evening that will challenge, complicate, undo, and then perhaps redo whatever you thought was true about American Jews and the larger political scene.  It’ll be provocative, challenging, and, if it’s a really good night, lots of fun too.

A critical look at the most popular expression in American Jewish life. This talk offers the history, context, and meaning of repairing the world for contemporary American Jews.

This can be one, two, or three lectures.

These lectures will trace the history of American Zionism from 1880 to the present. They will focus on the eastern European origins of American Zionism, the dual loyalty conflicts faced by American Jews through the 1920s, the effects of Hitler's rise and the European war, and culminate in the organized Jewish community's responses to the establishment of the State of Israel. Students will then follow the fascinating path of American Zionism in the 1950s, 1960's and beyond, examining the effects of the Cold War, civil rights movement, and contemporary issues.

A survey of the Zionist movement from the late nineteenth century to the creation of the State of Israel in 1948.

This presentation examines Jews and liberalism from the New Deal in the 1930s, decade by decade, through the civil rights movement of the 1960s. It offers new ways of understanding American Jewish liberalism and its limitations in twentieth-century America.

“If you want to be poor all your life, “ an eastern European Jewish immigrant was told, “go to New York. If you want to be rich, go to the other side,” meaning California, where economic prosperity and social acceptance promised Golden State Jews opportunities unknown in the East. For many new Jewish immigrants, California became the new promised land, even as it challenged many New York-centered assumptions about American Jewish life. Whether you are native to California, New York, or anywhere in between, come hear a provocative talk that just might undo the way you think about American Jewry.

This book opens up hundreds of historical documents in American Jewish history. We will select the documents of greatest interest to your group and analyze them together. While not included in the book, I also offer audio and video “documents” that make for an even more interesting (and fun) presentation.

A re-appraisal of Jewish involvement in the civil rights movement, this presentation shows how American Jews leveraged the Black Power movement to increase Jewish ethnic and religious identity in the late 1960s and early 1970s.

Anti-Semitism From the Right and the Left: Jews and the American University, in progress.

This is my current research project. Since the book isn’t yet finished, this presentation offers a chance for participants to get a real-time update on the book-writing process. I will explain the genesis of the book idea, share my current research, offer tentative conclusions, and engage the audience with the pressing questions of my research.